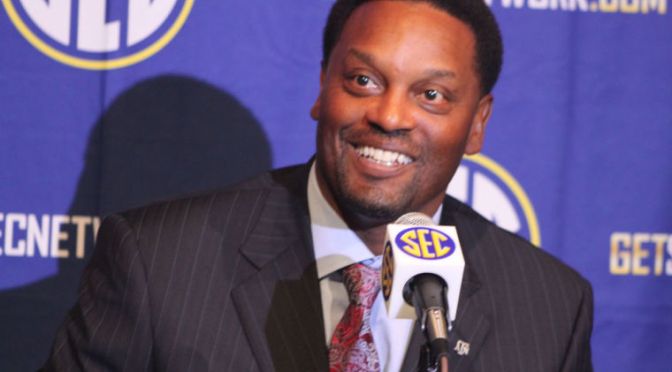 Coach Sumlin took the podium at SEC Media Days this morning and discussed everything from the expectations for this season to the budding rivalry between A&M and LSU. However, he continually stressed a singular theme throughout – A&M will be more physical. It is what they focused on this offseason, and it is being coached up by new coordinators John Chavis and Dave Christenson.

On the new and improved defense…
Last year, the Aggies were simply awful at defense. There’s no sugar coating it. Julien Obioha said he couldn’t even pinpoint the problem the last couple of years since it was so “bad at a lot of things”. But with the arrival of John Chavis, many expect that to change.

Aggressive nature of Chavis will be the difference this year according to SEC Network anchors.

His imprint has been very noticeable. Daeshon Hall now lines up opposite of Myles Garrett, Julien Obioha moved to the inside, and running back Brandon Williams is getting worked at cornerback. And by at least one account, Williams expects to play.

Sumlin said SR Brandon Williams told his fellow defenders he wasn't switching positions to 'sit on the bench' — from RB to CB.

These personnel changes are a small sample of the complete reboot A&M’s defense is undergoing. But more than shifting people around, Chavis is bringing his fiery attitude and aggressive scheme to Kyle Field.

A&M DL Julien Obioha: "Chief has a fiery personality. You can tell why #LSU plays the way they do." pic.twitter.com/O9kSmUIH8J

Mike Matthew on A&M defense: "There are a lot more guys flying around. They're focusing on getting upfield and disrupting the play."

There are high expectations for this team and this defense. And if anyone can deliver, it’s The Chief.

Sumlin says he likes the "buy-in" he's seen from his defensive players with Chavis and their improvement in the spring. #SECMD15

Obioha on Chavis' first words to A&M players: "We're here to win championships. Nothing else." #LSU

On A&M’s rivalry with LSU…
The Aggies have one SEC West team that they have not yet beat in conference play – LSU. John Chavis was able to shut down Johnny Manziel in consecutive years and he masterfully executed the no-call offsides play to ice the 2014 matchup. Sumlin had had enough.

Best quote from Sumlin about if you can't beat 'em hire 'em in regards to Chavis. "Not kinda, that's exactly what I did!"

But the rivalry has extended well past the gridiron. Both schools aggressively recruit their counterparts turf. This has led to Texas standout safety Jamal Adams finding his way to LSU and 5-star wideout Speedy Noil choosing A&M.

Sumlin says he was given a big hug by LSU freshman safety Jamal Adams before game last year. A&M had recruited Adams hard

One thing is for certain, don’t expect Sumlin to receive a warm welcome in Tiger stadium when the Aggies travel there this November.

Sumlin on how much more ‘spice’ the LSU rivalry can have: “When I walk into the stadium, they don’t seem very happy with me."

On A&M’s wealth at the QB position…
The Aggies enter the 2015 season with two very capable quarterbacks in Kyle Allen and Kyler Murray. While they will both compete for the starting spot, Kyle Allen’s experience and time in A&M’s system should prove to be the deciding factor. Nevertheless, the Aggies are very lucky to have two quarterbacks of this caliber.

On QBs: "Kyle is confident… Kyler Murray is a great competitor… We've got 2 pretty good ones." – @CoachSumlin pic.twitter.com/pemofRWIAh

Ifedi on Kyle Allen: “He’s the kind of guy you want at quarterback in this league…he’s going to be great for years to come."

On what the new OC Dave Christenson brings to the table…
As mentioned before, the reoccurring theme was that the 2015 team needed to be physical, something that had slipped away the past two seasons. Sumlin truly believes that the hiring of Dave Christensen has addressed that.

The offensive line, the position group Christensen handles, has moved towards more GAP scheme with an emphasis in the run game.

At the end of the day, Sumlin saw an offensive line that was getting pushed around and he addressed it with the most underrated hire of the offseason. Christensen is already addressing the mental makeup of this team and it all starts with the maroon goons in the trenches.

A&M OL Germain Ifedi on Dave Christensen: "The thing he's instilled it attention to detail. He's been a welcome voice."

On the expectations for this upcoming season…
Both coach Sumlin and the players got a chance to address last year’s average season and some of the problems the team faced.

But the bowl game against West Virginia served as a spring board into the high expectations for this upcoming season.

Sumlin mentions bowl win over West Virginia as a springboard into the off-season. Said Aggies entered workouts with a lot of confidence.

Sumlin: “Our guys left the season feeling a heck of a lot better about themselves than they did in the middle of the season."

And as the season 2015 nears, people are starting to wonder “why not A&M”. Shoot, Auburn is picked to win the SEC while A&M is picked by many to finish last. That just shows you how razor thin the SEC West is.

Sumlin said Spurrier told him: “You guys had same record as Auburn last year right? You should tell (the media) that”

"I'm as excited for this year as any year as any other year because we have a whole lot of young talent."– Sumlin #SECMD15

“I think we’re sleeping a little on Texas A&M. A&M is primed for a major run in the future.” – @finebaum

This site uses Akismet to reduce spam. Learn how your comment data is processed.